When asked how great science was done, Nobel Prize winning genetic biologist, Barbara McClintock, said it involved leaning into, and having a feeling for, the organism.

McClintock was described by fellow scientists as ‘one of the most precise empirical observers and one of the most rigorously logical thinkers in American science …’ (Palmer in Glazer, 1999, p 23).  In short, she was meticulous about documenting her scientific findings – she worked in a highly structured way.

It was this structure that allowed McClintock to embrace the unknown life of her organism (ears of corn).  She could listen to what her research was telling her, she could be creative with ideas and  trust their direction.

Where did the unknown lead McClintock – to a Nobel Prize in science for her ground breaking work in genetic transposition (“how genes carried their message from one place to another Palmer in Glazer, 1999, p 23).” 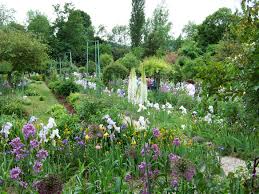 To the on looker, Monet’s garden in Giverny, Normandy (France) may appear inspired by the  artist’s paintings and designed in some hap-hazard fashion.  This is not the case, and the kaleidoscope of colour that greets the viewer at any time of the year is a visual representation of highly structured work.

Monet structured his garden, designed it, researched it and methodically planted it – so that opposing colours would flower all year round. It took him nearly twenty-years to complete his garden masterpiece – only then did he start to paint it.

Monet’s garden – his structure – inspired his creative work – his paintings. It was not the other way round