“Everybody is a genius. But if you judge a fish by its ability to climb a tree, it will live its whole life believing that it is stupid.” Albert Einstein 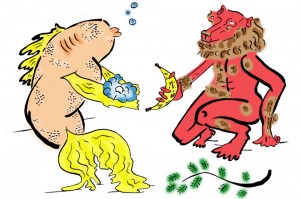 Most of us have had experiences where we’ve felt like a fish that has been asked to climb a tree. We have tried, and tried and tried – but failed. We remember failing; we remember trying too, but the memories left by our failures are often etched more deeply into our psyches than those of our courageous efforts. Little wonder that many of us live our lives believing that  – in some areas of it at least – we are stupid: we’re just not cut out for learning this or that.

Bananas and Pearls: Monkeys and Fish.

We learn from making mistakes, without making mistakes we can’t learn any thing – the same applies to just about every mammal and no doubt fish and reptile too. This is what “playing” is meant to be about – learning through mistakes. These mistakes become our pearls of wisdom. These pearls are resilience. We need to nurture these pearls. They come in all shapes and sizes- all are precious.

Without the ability to learn from our mistakes we have no pearls of wisdom to share, no bananas to feed our curiosity: no resilience.

Resilience can be learnt, it can be shared.  Through sharing learning experiences everybody learns –  we learn that the richest pearls and most nutritious bananas are developed by those who have made the most mistakes. Why? because resilience is the heart of creative thinking.

Who was Einstein and what has this quote got to do with him?

Albert Einstein was born in Ulm, in the Kingdom of Württemberg in the German Empire on 14 March 1879. He died in Germany in 1955. From an early age, Einstein enjoyed learning and never forgot the learning experiences he enjoyed as a child – building models and making mechanical devices: his passion to learn allowed him to embrace failures as valuable learning opportunities. And failures there were,  for example, in 1895, at the age of 16, Einstein sat the entrance examinations for the Swiss Federal Polytechnic in Zürich (later the Eidgenössische Technische Hochschule ETH). He failed to reach the required standard in the general part of the examination  (http://en.wikipedia.org/wiki/Albert_Einstein).

Frustration and failure dogged Einstein even after his initial studies were completed with exceptional results in maths and physics. For example,  it took Einstein over two years to find a teaching post – despite having achieved academic excellence in his chosen field; his first marriage ended in divorce, his second in tragedy.

Unable to teach and/or pursue an academic career Einstein, in 1901, took a job evaluating patent applications. While working at the office he completed his PhD at the University of Zurich. In 1908, Einstein “was recognized as a leading scientist and appointed lecturer at the University of Bern”.

In 1909 Einstein was appointed associate professor (http://en.wikipedia.org/wiki/Albert_Einstein); eight years earlier he had been unable to secure a teaching position any where.  As well as he contributions to philosophy and science, Einstein was committed to human rights and civil liberties.

Einstein loved learning, he was curious, as is every child, about the world around him. He never lost this curiosity and he used his passion for learning to embrace failure as a key aspect of learning: he learnt to be resilient.

Einstein understood that resilience was the cornerstone to his creativity. Little wonder that a man so passionate about learning and its benefits for humanity should reflect on how a fish would be judged by itself and others if asked to climb a tree.